The story of Theranos has dominated headlines for years now. From the initial excitement of a revolutionary biotech startup, to the sudden suspicions and accusations, to the jaw-dropping exposure of a multibillion-dollar fraud, the journey of Theranos has been nothing if not captivating.

Theranos promised to deliver a groundbreaking blood testing technology that could revolutionize health care, and it was led by a young, charismatic, Silicon Valley sensation named Elizabeth Holmes, who turned out to be nothing but a fraud, fooling the media, the public, and stealing millions from savvy investors.

The Daniels Fund Ethics Initiative (DFEI) at the University of Colorado Denver Business School brought John Carreyrou, the two-time Pulitzer Prize-winning investigative reporter at The Wall Street Journal and author of the National Bestseller Bad Blood: Secrets and Lies in a Silicon Valley Startup to Denver to share the full inside story of the breathtaking rise and shocking collapse of Theranos. The event was moderated by Melanie Kay, DFEI Director at the CU Law School, with over 400 attendees joining either in person or via live stream in Boulder.

Early in 2015, Carreyrou got a call out of the blue, from Dr. Adam Clapper, a pathologist who often blogged about scams in the laboratory space. He asked, “Have you heard of this ‘wunderkind’ out of Silicon Valley named Elizabeth Holmes and her startup, Theranos?” Carreyrou had, in fact, read a New Yorker profile and had already been skeptical.

“Holmes was a Stanford dropout with barely a year and a half of medical studies under her belt, who had apparently revolutionized medicine, and I knew that’s just not how things work,” Carreyrou said.

Carreyrou said he believes that Holmes did not start off with fraudulent or malicious intent. She was instead simply full of ambition and dreams of becoming the “next Steve Jobs” from the start. However, the industry and technology proved more difficult than Holmes probably anticipated. The pressure and unrealistic expectations she created formed an incredibly toxic work culture.

The pressure and unrealistic expectations she created formed an incredibly toxic work culture.

“She was very secretive,” Carreyrou said. “She didn’t want to hear ‘No’. People were constantly being hired and fired. The lies became bigger. The corners that were cut became bigger.”

Carreyrou said “the big red line” was crossed when, in 2013, Holmes and her business/romantic partner made the decision to go live with their flawed blood testing technology instead of pulling back. They made this decision, of course, to continue to solicit funding, even though they were now unquestionably not delivering on their promises.

“I think this was a case of someone with real vision and dreams, getting ahead of herself and getting caught in the cycle of lies,” said Carreyrou.

“I think this was a case of someone with real vision and dreams, getting ahead of herself and getting caught in the cycle of lies.” – John Carreyrou

Over its 12-15-year lifespan, Theranos raised almost $1 billion, with over 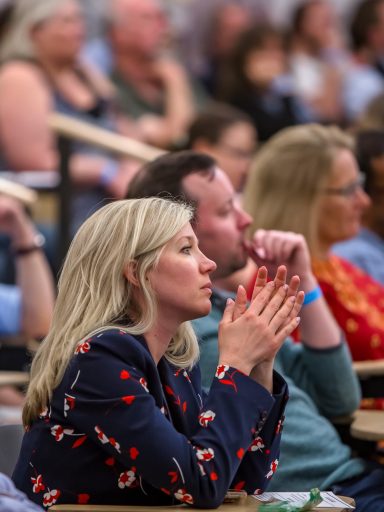 75% of that funding raised after the technology was commercialized. This makes it clear, according to Carreyrou, that Holmes pushed out the product before it was ready for the express purpose of misleading investors.

But how was this young woman able to gain such trust and enthusiasm from so many respected investors to begin with? As a 19-year-old college dropout, Holmes didn’t have much credibility, but she did have passion and an innate sense for business.

Her first key connection was Don Lucas, a well-known venture capitalist (VC) in Silicon Valley, and he, as the Chairman of the Board of Theranos, introduced Holmes to his VC contacts. Before long she had developed a pattern, befriending older man after older man to believe in and champion her. She connected to former Secretary of State George Schultz and wowed the ninety-something year old, who then opened up even more well-known and respected connections to join him on a Board of Directors stacked with stars from the political and military worlds.

“Holmes seems to have used all of these older men for credibility. In hindsight, the Theranos Board was a big red flag,” said Carreyrou.

While the Board was made up of successful and well-respected older men, none had any knowledge of medicine or diagnostics. Investors saw this impressive Board though, and opened their checkbooks.

There was a long and well-documented history of Theranos employees raising concerns and suspicions, often at great personal risk. Theranos’ first CFO raised concerns early on, questioning Holmes when he learned the blood testing machine demos for investors were essentially fake. He was fired on the spot for not being a “team player.”

Carreyrou said that he’d worked on many stories before involving whistleblowers, but never encountered a situation where the accused organization counter-attacked so aggressively. Theranos had by this time gone live with faulty medical technology that was endangering tens of thousands of patients. This was the aspect that was sure to outrage the public the most, and Holmes and her lawyers seemed willing to stop at nothing to prevent the exposure.

But even with the threats from Holmes and her lawyers, Carreyrou secured several key sources needed to corroborate the stories. “These whistleblowers put themselves in great personal, professional, and legal risk,” said Carreyrou. “But this wouldn’t have been possible without them. They truly acted as heroes.”

“These whistleblowers put themselves in great personal, professional, and legal risk. But this wouldn’t have been possible without them. They truly acted as heroes.” – John Carreyrou 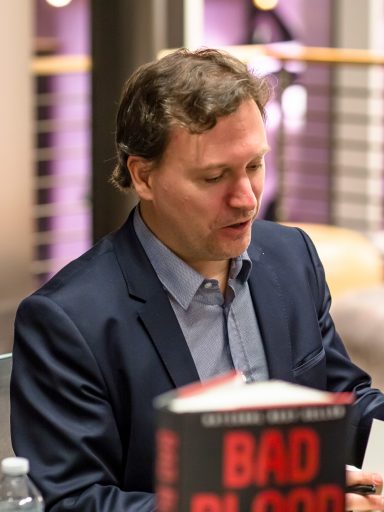 With the fraud exposed, Elizabeth Holmes drew harsh criticism from the media and public, but never showed any signs of regret, remorse, or even responsibility. On the day Theranos’ doors were closing, Holmes chose to attend the Burning Man festival, wearing fur.

Carreyrou said, “This is someone with a great sense of entitlement. She has developed a sense of persecution and still refuses to concede that she did anything really wrong.”

The “cult of the genius young founder” has been a problem in Silicon Valley for decades, Carreyrou said. So many stereotypical Silicon Valley men have used the “fake it ‘til you make it” mentality to climb to the top, and Holmes felt entitled to do the same.

“Silicon Valley’s culture made someone like Elizabeth Holmes possible and able to thrive,” Carreyrou said.

“Silicon Valley’s culture made someone like Elizabeth Holmes possible and able to thrive.” – John Carreyrou

“The Daniels Fund Ethics Initiative has allowed us the opportunity to bring fascinating speakers like Mr. Carreyrou to the Business School,” said Ira Selkowitz, DFEI Director at CU Denver. “The Theranos story is a real-world example of what happens when ethics are not a part of a business’ foundation. We work to provide opportunities and tools to help students develop life-long integrity and ethical fortitude.”

The CU Denver Business School and the CU Law School each received a five-year grant in 2015 from the Daniels Fund to participate in the Daniels Fund Ethics Initiative Collegiate Program, aimed at strengthening ethics education for students and extending ethical behavior beyond campus and into the community. The grant is used to instill a deep and unwavering ethical foundation through course curricula, events, and community collaboration.