From earning his MD from the University of Colorado Denver School of Medicine to completing his Executive MBA in Health Administration at the CU Denver Business School, Brian Davidson is proud to reflect on his journey at CU Denver.

Brian is currently the President of St. Mary’s Medical Center, a 350-bed tertiary regional referral hospital, located in Grand Junction. He’s only in his 40s, but Brian has always known that while he wanted to help patients, another part of him wanted to do more.

Only five percent of the nation’s hospital executive leaders are physicians – Brian is one of them. With both medical and business education, he can give physicians a voice when business decisions are being made.

The beginning of his CU Denver journey

Brian is a Colorado native from Wheatridge, CO. He was a chemistry major and a pre-med student at the University of Northern Colorado for his undergraduate degree. A turning point for Brian was when he became the student body vice president for academic affairs.

Brian completed his general surgery internship at St. Joseph’s hospital and came back to CU to finish his anesthesiology residency. During his residency, he expressed interest in the business of healthcare and operations and was sent to Stanford University for a clinical rotation. There, Brian made a connection with someone who had an MBA in the business of perioperative services – the business of the operating room.

This inspired Brian to meet with Errol Biggs, senior instructor of health administration, to find out more about the Executive MBA in Health Administration program. Errol told Brian that if he decided to remain in Colorado, the network Brian would build would be worth gold. “That was completely true,” said Brian, “Even in my role today I maintain great relationships with graduates from the University of Colorado.”

After finishing his residency, Brian enrolled in the CU Denver Business School. “I remember sitting in class on the first day of the MBA program, after finishing 12 years of school to be an anesthesiologist,” said Brian. “I was excited to learn about the world of healthcare business and challenge myself to something new.”

“I was excited to learn about the world of healthcare business and challenge myself to something new.” – Brian Davidson

Simultaneously, Brian was also starting his administrative fellowship centered on perioperative services at the University of Colorado’s Hospital. Brian constructed his own fellowship, becoming the first administrative fellow on the Anschutz campus to be a physician, since most fellows in hospitals are MBA or MHA graduates.

Brian was able to apply what he learned in his Executive MBA courses directly to his fellowship. “I would spend time on my fellowship days at the hospital going to finance and accounting meetings. So, I took what I learned at the CU Denver Business School and applied it often the next day to the Anschutz medical campus. It was immediate application.”

“I took what I learned at the CU Denver Business School and applied it often the next day to the Anschutz medical campus. It was immediate application.”- Brian Davidson

After completing his fellowship, he was asked by the University of Colorado to be a clinical faculty member and then later became an Associate Medical Director for the Perioperative Services Department and Vice Chair of Quality and Patient Safety for five years.

Brian began to look for new opportunities and landed a position at St. Mary’s Medical Center in Grand Junction as the Chief Medical Officer. After a year, Brian was asked to become the interim president and a candidate for the president of the hospital. He went through a national search as a candidate and after seven months, Brian was recognized as the new president.

“I think that the Executive MBA program and my fellowship worked very well together at the University of Colorado. Both of them advanced my career by many, many years,” said Brian.

“I think that the Executive MBA program and my fellowship worked very well together at the University of Colorado. Both of them advanced my career by many, many years.” – Brian Davidson

The motivation behind all the hard work 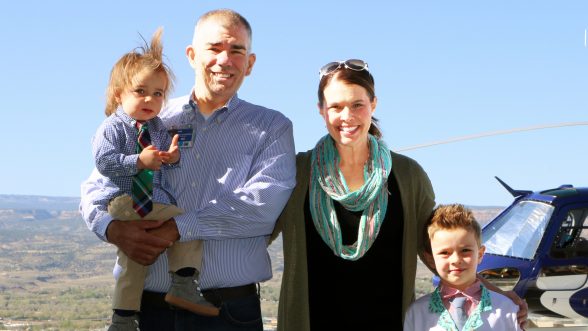 Brian’s motivation to become an executive leader was rooted in the small number of physicians that are in the executive suites making decisions about healthcare. He felt that they were underrepresented in the executive rank of healthcare organizations and he sought to change that with his career.

Typically, the average physician in an executive suite has 30 or more years of experience in their field. These senior physicians are usually not formally trained in business and it sometimes sets them at a disadvantage. So, Brian treats his job as a subspecialty since there aren’t many people that have a toe in both ponds.

“I wanted to create my career so that I was both a physician and an executive leader with a business background,” said Brian.

“I wanted to create my career so that I was both a physician and an executive leader with a business background.” – Brian Davidson

Not all physicians can be leaders

Even though Brian is currently a leader, his leadership skills had to be developed over time. He believes that, “to be a leader, the number one thing that you should want is for the world around you to be better.”

As an executive leader, he enjoys both worlds and can see the differences first-hand. For example, a physician is someone who is an expert in their own field and deal with patients every day. They become incrementally better within their own controlled vertical environment.

However, as an administrative leader, they have to be willing to learn from others because they are a generalist. They work with so many different people that are specialized within their own field. They have to understand that everyone in a business organization knows a piece of the pie.

Based on a research study of 5,000 individuals in the workplace, emotional intelligence accounted for 58% of job performance and was the single biggest predictor of success for leaders.

Staying involved in his community

In addition to his role as president of St. Mary’s Medical Center, Brian is also a volunteer faculty by appointment as an Associate Clinical Professor at the University of Denver’s School of Medicine.

Brian advises students to “find mentors along the way and people that will always push you,” and to surround yourself with people who are smarter and more accomplished so you can push yourself to meet that standard.

Brian looks forward to seeing what opportunities the future will bring him. With healthcare changing so rapidly, he doesn’t know where he’ll be 10 years from now. He said, “I try to keep an open mind for new challenges that come my way.”

Our Executive MBA in Health Administration is rated number two in the country according to U.S. News and World Report. Interested? You should take a look at all of our MBA programs.